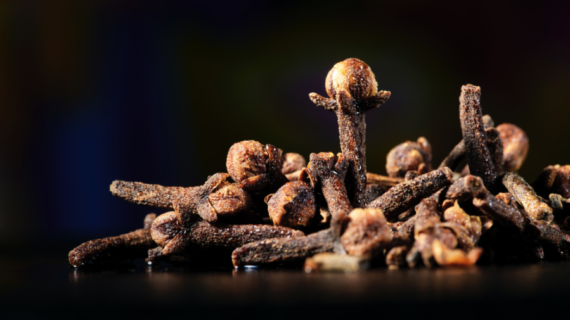 Do you usually use cloves for cooking? Cloves or in Latin Eugenia Caryophyllata is one of the oldest and most popular spices ever. It has a long history, regarding its contribution to culinary and pharmaceutical fields, cloves are widely used in international cuisine as well as medicine.

Cloves are dried flowers that come from the tree family of Myrtaceae. It was named after the French word “clou” meaning “nail”. This spice, which is famous as a mixture of Indonesian kretek cigarettes, has a powerful aroma and resembles a tiny tack.

The oldest cloves were first discovered on the island of Maluku, Indonesia. And today it is still a prominent product of Indonesia. Not only in Indonesia, now you can easily find this spice in various parts of the world such as Madagascar, India, Sri Lanka, Zanzibar (Tanzania), and other hot tropical areas.

So, this spice with an intense aroma has a subtly sweet flavor and adds a lot of warmth to the dish. However, the sweetness is balanced by a slight note of bitterness and astringency.

Cloves are best paired with spices that have a sweet taste such as nutmeg, cinnamon, and allspice. What food do you put cloves in and how to use it? (Indonesian Culinary Version)

Because of its strong aroma and being able to neutralize fishy odors, it is often used in dishes that contain seafood, offal, or goat.

Indonesian dishes that use cloves as spice are gulai, kebuli rice, stews, or curries. Some even add it to nasi uduk to enrich the taste.

How to add cloves to cooking can be done by using them whole or you crushed them first. Crushed cloves will emit a stronger aroma than if we use them as a whole.

Although cloves are tiny, the aroma is very strong so use it sparingly. Because if there is too much aroma in the dish, it will be very pungent. To cook 1 chicken, just use 2-5 cloves or 2-3 for 500 grams of meat.

The do’s and don’ts when using cloves for cooking.

As already mentioned above, cloves have an intense aroma, stronger than allspice. This means you have to be very careful with how much you use. Because if you use it too much, cloves can cover up other spices and make your cooking bitter.

If you use it in the right amount, then the taste of cloves can complement other spices that have a sweet and savory taste, and also it can make your dish more delicious.

It would be a bad idea to leave whole cloves in your cooking for some reason. The first relates to the spicy taste of cloves. Whole cloves have a sharp taste, so when you eat a whole clove your palate will be filled with the taste of cloves, leaving the tongue numb.

The next reason relates to the texture of cloves. Cloves have a nail-like texture that can cause you to choke as if you swallow a whole fishbone.

By mixing cloves and onions, you don’t have to bother grinding and removing individual cloves one by one.

The result of cooking cloves for too long is the same as giving too many cloves to your dish. In other words, your food will be bitter and have a strong clove taste. This is because cloves will continue to secrete essential oils during the cooking process.

Like other spices, the flavor of cloves will be more powerful and stay fresh if you buy them and grind them by yourself. However, it would be better that you buy them ground.

The reason has to do with the clove oil effect it has on plastic. Most spice grinders are made of plastic and clove oil can cause holes in the plastic, which can potentially damage it. This goat curry recipe is the Central Javanese version. This dish has a watery and abundant sauce but is still tasty because it is rich in spices. Not only meat, but the parts of the goat that are also cooked are offal and ribs. Goat curry is best eaten with a spicy taste.

The cloves will be combined with cinnamon, star anise, lemongrass, bay leaves, lime leaves, and galangal to remove the fishy smell from the goat and give the curry a sweet and spicy taste.

This nostalgic home cooking is usually an alternative dish when you are confused about how to process the chicken. In addition, a chicken stew is also often served at the time of Eid al-Fitr for Muslims in Indonesia. Cloves can be combined with other spices such as bay leaves, galangal, ginger, and ground nutmeg.

Kebuli rice is usually cooked in mutton broth, goat’s milk, and butter. This food is very popular among the Arab community in Indonesia or the Betawi people in Jakarta. Cloves are cooked together with lemongrass, cinnamon, cardamom, nutmeg, and raisins.

What are the health benefits of cloves?

Although cloves have a tiny size, this spice contains a lot of nutrients that are good for the body. One teaspoon of cloves or 2 g contains 21 calories of energy, 1 gr of fiber, and 1 gr of carbohydrates, calcium, magnesium, and a small amount of Vitamin E

One teaspoon of cloves can also meet 30% of manganese, 4% of Vitamin K, and 3% of Vitamin C of daily needs. Here are the health benefits of cloves:

Stomach ulcers are most often caused by thinning of gastric mucus caused by several factors such as stress and infection.

An animal study showed that clove essential oil can increase the production of gastric mucus which functions as a barrier to the effects of stomach acid, while preventing erosion of the stomach wall due to stomach acid.

Cloves contain anti-inflammatory components that can reduce swelling in the area of ​​​​the infected tooth. Besides killing bacteria in the mouth, cloves can also help relieve tooth pain. You need to know that this also can get rid of bad breath!

Another health benefit of cloves is that it can treat coughs with phlegm. The eugenol component in cloves is an expectorant, which can help expel phlegm in people with phlegm cough.